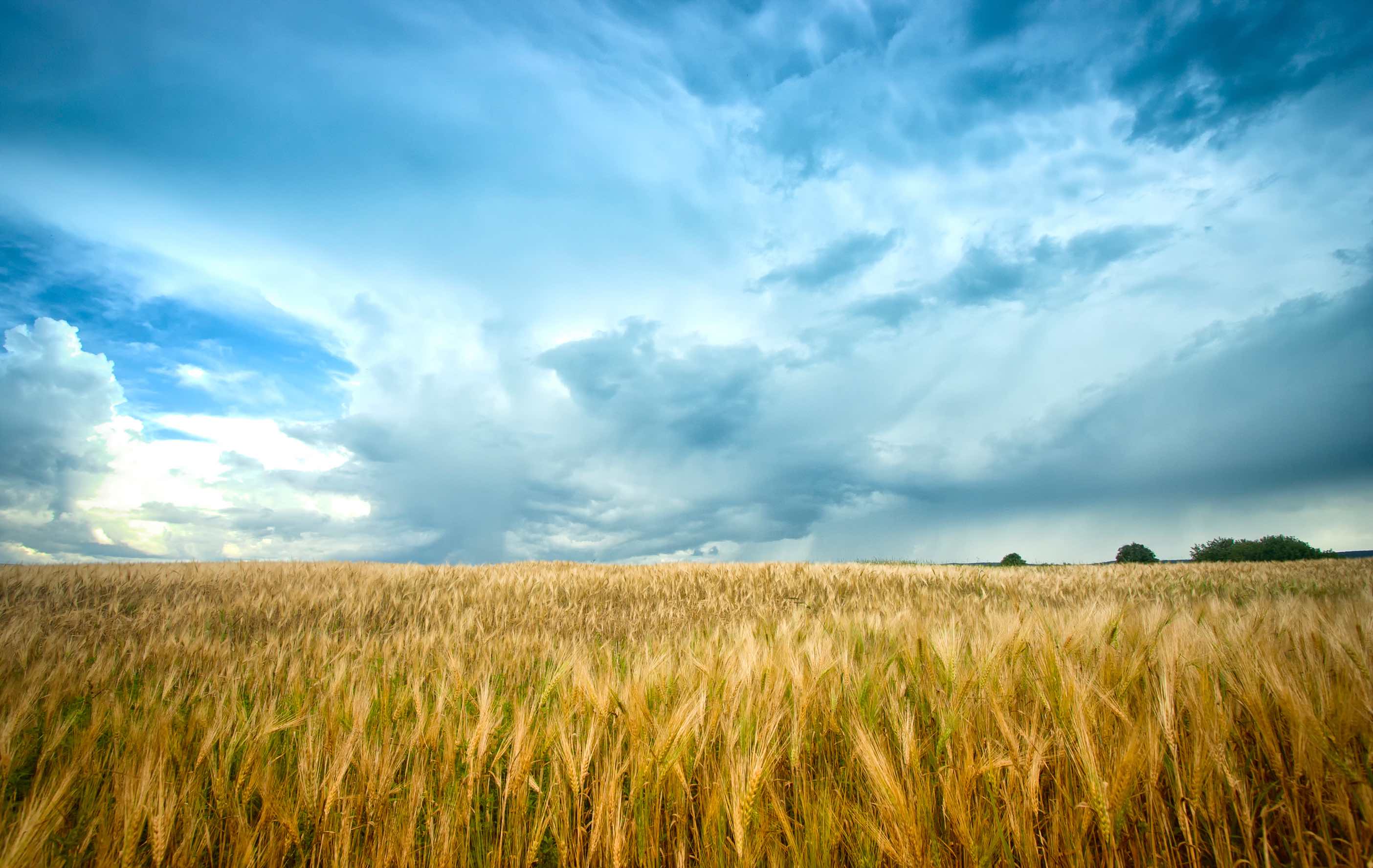 Today producers and industry have an excellent opportunity to get more nutrition and benefits from feed barley. Because of the prominent role of this feed source particularly in Western Canada, the improvements made to feed and nutrition strategies can have a strong positive impact on the economics and competitiveness of livestock production in this region and other key areas where barley is a main feedstuff. But to get the most out of feed barley, animal nutritionists first need to better understand the real-world nutritional profile at a deeper level. The new barley survey initiative is designed to help address this need, building a resource of data and analysis over time that will support more “bang per bite” from this important feed ingredient.

For the 2017-2018 barley survey, samples were collected by the Alberta Barley Commission from locations across Alberta after the completion of the 2017 harvesting season. All samples were then analyzed at the University of Manitoba’s Department of Animal Science. This process produced a wealth of data on a variety of parameters including starch, protein, non-starch polysaccharides (NSP) – both water soluble and insoluble – neutral detergent fibre (NDF) and phosphorus (phytate and non-phytate).

These results align with knowledge that barley has more hard-to-digest components such as fibre compared to other common feed ingredients. The information uncovered will help researchers, nutritionists and technical experts understand those components and how to mitigate or neutralize them as barriers to feed value.

Another key finding is that 50 percent of barley phosphorus content is tied up within phytate molecules which are indigestible. Because of this, producers commonly supplement diets with inorganic phosphorous -- a practice that can add substantial cost. However advanced feed technology such as certain phytase and multi-carbohydrase enzyme formulations can breakdown these molecules and liberate the organic phosphorus. This can instantly add value to feed barley and reduce cost by eliminating the need to supplement.

The results helped provide a deeper understanding of the nutritional profile of barley, piecing together a puzzle of the profile that can be maximized through dietary strategies including advanced feed technology options.

• NSP on average was 17 percent, with 72.9 percent of that water insoluble and 27.1 water soluble. The NSP values particularly the water soluble component were much larger than the same component identified in surveys for wheat, with beta-glucan comprising the primary water soluble NSP for barley.

• NDF on average was 13.6 percent, which is somewhat lower than values commonly estimated, however this is still relatively high compared to other feed crops such as wheat, which is estimated around 9.31 percent, and corn, at around 10.4 percent.

BACKGROUND ON THE FEED BARLEY OPPORTUNITY

Barley, a versatile short-season crop, is among the most important feed-grains in Canada.(1) According to the latest data from Statistics Canada, the total Canadian barley production in 2017 was around 7.891 million tonnes, 95% of which was produced on the Canadian Prairies.(2) Alberta (including Northeastern British Columbia) and Saskatchewan are production leaders with approximately 50% and 40% respectively. Most of the barley production in Western Canada (approx. 61%) is grown for malting purposes, and around 32% is grown for feed.(3) Within Western Canada, Alberta figures as the province with the highest production of barley in 2017 (Figure 1).(2)

In recent years the demand for feed barley has grown rapidly, both in Canada and abroad. Based on this growing demand, CBS Inc. led its first barley survey initiative with the purpose of assisting our customers and the feed industry at large, in providing nutritional information about this economically important feed ingredient.

Table 1 shows the chemical parameters that were measured in each sample. On average, crude protein was 10.7% and varied considerably with a minimum value of 8.6% and a maximum of 15.3%. These results are in agreement with the values of 6.4% to 15.8% (% as is) reported previously for regular hulled barley, and are also in accordance with the 10.1% reported elsewhere.(1,4) In recent years the demand for feed barley has grown rapidly, both in Canada and abroad. Based on this growing demand, CBS Inc. led its first barley survey initiative with the purpose of assisting our customers and the feed industry at large, in providing nutritional information about this economically important feed ingredient.

During 2017, Western Canada experienced dry conditions and above average temperatures prevailing through early September which likely induced barley under cultivation to mature at a faster than normal pace.(3) It has been reported that the starch content of barley can be reduced under drought conditions as starch granules fail to mature, resulting in shorter grain filling periods and adversely affecting its final yield components.(5) In the current survey, starch content averaged 53.2% with a minimum value of 48.9% and a maximum of 57.9%, respectfully.

These findings are in line with previously reported values by Alberta Barley that determined average starch content of 58.2% in 2015.(1) It is noteworthy that the results in the current study indicate that the environmental conditions did not affect the starch levels in the samples analyzed - although it should be noted that the sample size for the current study was small.

With regards to NSP, from the average of 17.0% of total NSP found for Alberta Feed-Barley, 72.9% was water insoluble and 27.1% water soluble (Figure 2). When compared with other crops as wheat, it can be noted that the water soluble component is larger than the 24% of the same fraction for Canadian Wheat and reported in the latest CBS Wheat Survey.(6) 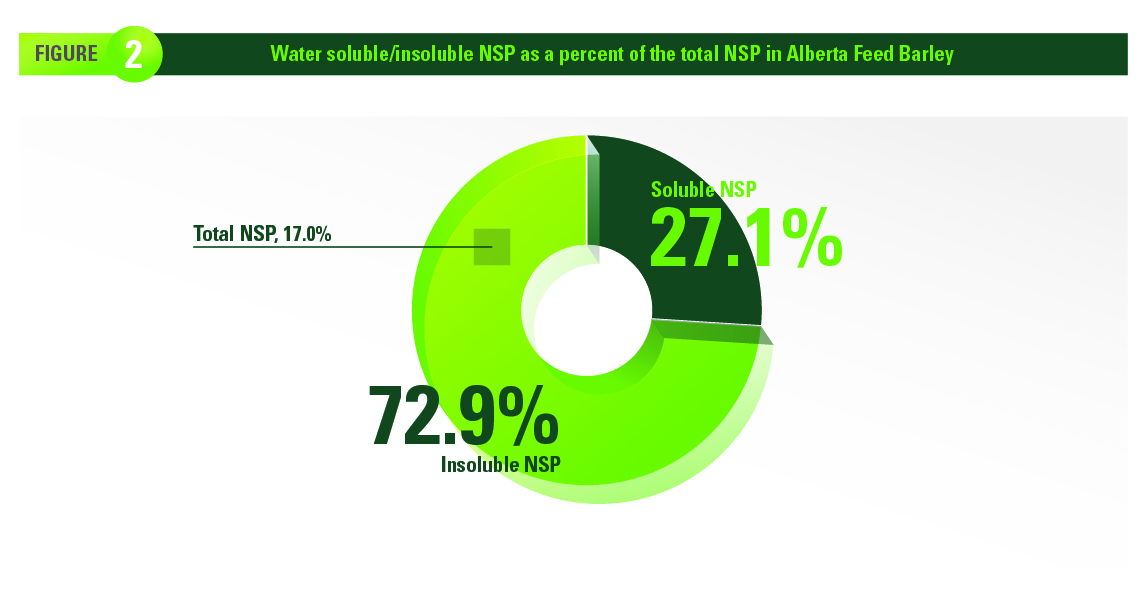 The major water soluble non-starch polysaccharide in barley is -glucan, and high dietary levels of this fibre fraction can increase the viscosity of digesta within the intestinal tract of swine and poultry, negatively affecting barley’s feeding value. However, exogenous carbohydrases added to barley-based diets are able to hydrolyze -glucans allowing for increased inclusion of barley into commercial swine and poultry formulations.

With respect to the other chemical components measured in this sample set, NDF was lower (13.6%) than the values reported elsewhere.(1,4) However, the NDF value for Alberta Feed-Barley is still higher than the ones reported for other crops, such as wheat and corn (9.31% and 10.4%, respectively).(4,6)

In regards to phosphorous (Table 2), the total content of this mineral in Alberta Feed-Barley was approximately 0.30%, from which 48.8% was non-phytate phosphorus and the balance was associated with phytic acid. By comparison, Alberta Barley reported 0.31% for total phosphorus for hulled barley, of which 63% was phytate phosphorus.(1)

As dietary phosphorus is the third most expensive nutrient in monogastric diets, supplementation with inorganic sources can add significant costs to commercial swine and poultry diets. According to this survey almost 50% of this mineral is tied-up to a phytate molecule in Alberta Feed-Barley, therefore supplementation with phytase and Multi-Carbohydrase enzymes could liberate significant amounts of phosphorus that would be made available for digestion and absorption, leading to significant economic savings.

The inaugural CBS Inc. Barley Survey has provided an important step forward to help build a databank in support of improved understanding of feed barley and related nutritional strategies. The 2017-2018 effort focused on sample collection from Alberta, the main province producing feed barley in Canada. The findings produced by this survey constitute a great tool in order to maximize the use of this important crop for monogastric diets.

5. Barnabas, et al. 2008. The effect of drought and heat stress on reproductive processes in cereals. Plant, Cell and Environment,