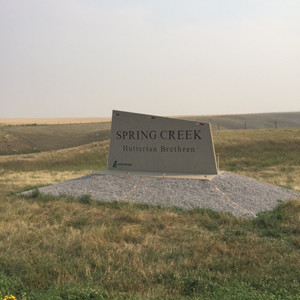 They planned it, transitioned to it, and now they've done it. Farmers at Spring Creek Hutterite Colony have achieved a milestone in the evolution of Canadian hog production by becoming among the first major farms in the Canadian Prairies to ship 'RWA' (Raised Without Antibiotics) hogs to market.

Use of bio-based feed additives including enzymes, nucleotides and yeasts played a critical role in helping the colony achieve RWA status without sacrificing health, performance or productivity.

The farming operation is among the first to show that, with the right approaches, producers don't have to sacrifice productivity or compromise health standards by going antibiotic free.

“It has taken more work to run the program but it has been worth it,” says Paul Hofer, swine manager for Spring Creek Colony. “We have less health issues and the results are better than ever. Any time you change a production approach you have to be very careful. We were a bit nervous at first, but we took it slow, got the right advice and implemented the right practices. We feel great about the product we are producing."

“Everything has gone very well for us,” says Mike Hofer, assistant swine manager. “The barn is clicking on all cylinders and the full flow of our swine production is now going out RWA. Average days to market, feed conversion, gain, even mortality – it’s either similar or often significantly better under the new program.”

Here's a look inside the achievement . . .

Starting in early August the colony has completed several shipments, each of about 200 hogs at market weight of 265 pounds. The main initial customer is Britco Pork Inc., based in Langley, B.C., a specialty pork processing division of Donald’s Fine Foods which plans to sell the RWA pork in greater Vancouver and the lower mainland.

The progress by Spring Creek may prove a key tipping point for swine production in Western Canada and beyond, as more operations consider shifting to reduced use of antimicrobials and / or RWA approaches. Rising interest in this evolution has been driven by changing marketplace demands and new restrictions coming such as the Veterinary Feed Directive in the U.S., taking effect January 1, 2017, and similar new rules planned for Canada.

The antimicrobial use issue is not black and white, says Paul Hofer. But the bottom line, as Spring Creek Colony sees it, is that farming operations are best positioned for the future if they can reduce reliance on antimicrobials as much as possible without compromising animal health and welfare.

“I think the future is coming this way . . . it’s what the marketplace wants and what consumers want,” says Paul Hofer.

“We figured if we’re going to be in this business long-term then this is the best approach and we should get ahead of the curve. For us, animal health and welfare is still first and foremost. Part of our approach is doing all we can to create an environment where disease risk is as low as possible and where the animals are well supported, for example with nutritious high quality feed and clean water. We try to keep the disease challenges down in the barn and keep a healthy gut in the pig.”

If any animals need to be treated with antimicrobials for health reasons that’s what is done, says Paul Hofer. “But we separate the treated animals out so they go to a different market not with the RWA animals. So far we haven’t had to treat many.”

A lot of work is put into regular washing and intense disinfecting of the pens and rooms, which is done by Titus Hofer and barn staff. Strict biosecurity protocols are also observed. Strong monitoring and proactive approaches to addressing potential issues are important.

In addition, the colony uses bio-based feed additives technology such as enzymes and nucleotides to support optimal nutrition, health and performance. “The feed technology has come a long way and is a big part of our program that we couldn’t have done this without,” says Paul Hofer. “It does a lot to make sure you get the same or better performance even without antibiotics. And bio-based fits what consumers want.”

Spring Creek colony passed regular third-party audits to ensure RWA status. “It has taken more work to run the program but it has been worth it,” says Paul Hofer. “We have less health issues and the results are better than ever. We feel great about the product we are producing."

A rich source of conditionally essential nutrients, used for a range of productivity and performance benefits.